Manufacturing Hype at the Grammys

Let's quickly get over the tacky part of the Grammys' jewelry coverage hype...cost.  Bleh...lots of chatter about Carrie Underwood's $31M, 381 carat Jonathon Arndt necklace...all of it about price.  Even she fretted about the cost and how the necklace made her feel like a target... 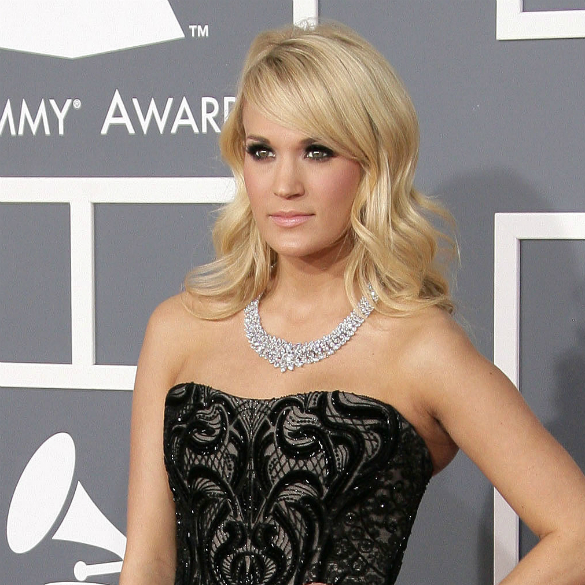 ...Chatter about the $5M price tag on JLo's Norman Silverman diamond bracelets, rings, and 10 carats of diamond stud earrings... but nothing on that fabulous gold bangle.  Has anyone found anything about that unusual piece? ﻿﻿﻿﻿ ﻿

...More manufactured buzz, but by fans about Rihanna's supposed engagement ring... she wore a diamond Neil Lane ring on her left hand ring finger with her other Neil Lane rings, including a great snake.
Doesn't look like an engagement ring to me; looks like an on-trend wearing of multiple rings.  If Chris Brown gives her an engagement ring, it will probably be blatant and lack class or originality.

Of course, most manufactured buzz centered on CBS' dress code.  Nipples, "puffy areas," too much or too little leg- CBS should give the guy who wrote that memo a raise for the buzz it generated before and during the Grammys.  Entertainers had to think about being  scandalous this year...and viewers ogled and commented about women's bodies like they haven't in past years (pervs).  Katy Perry, who usually downplays her curves, demonstrated her rebelliousness and stuck it to the man with her beaded neckline.
Beaded necklines are gaining headway in fashion, and, and if you rock one like she did, it is wise to emulate her restraint with the rest of her jewels.

But stacking jewelry is still here in a big way and was a norm at the 2013 Grammys.  Of interest is the ubiquity of the men stacking their necklaces, bracelets, and rings, too.  My favorite Grammy photo shows this.

Not Jay-Z and Beyonce, but the fella photo bombing them with the Mr. T. bling and stacked watch and bracelets.

Isn't this a great picture ?  No one is posing, and the body language between Beyonce, wearing Lorraine Schwartz, and Jay-Z, with a Cartier Panther ring, is comfortably intimate.   They know who they are and don't need to be anyone else.  Everyone in the picture is happy, having a good time, and wearing jewelry that makes them look good and compliments their overall look.  That combination is so unusual in Grammy coverage that it is almost scandalous.
Posted by oxinsocks at 6:00 AM