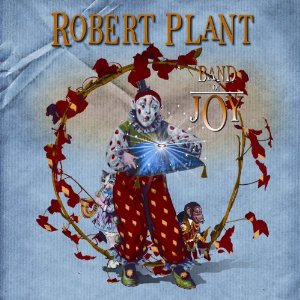 Saw Sir Robert and The Band of Joy in concert in Feb.  They were a-freaking-mazing.  Initially I thought the ring on the shirt and CD was a reference to Lord of the Rings, since Zep references Lord of the Rings in two of their songs...and the One Ring is a plain, gold band.  But the pun references the ring itself-the band of joy- a "common" wedding ring.

What is it about wedding rings?  Jewelry is usually adornment to draw attention to the wearer.  But wedding rings go beyond the self.  Many people never take them off; in a recent documentary, most of the actors playing Alfred the Great's army forgot to take off their modern gold wedding bands- no one noticed them...not the actors, not the director, not the producer.  If people take off their wedding rings because of weight gain or sports, they often wear them on necklaces.  I know a married couple who made matching silver bracelets when they "grew out of" their rings- and starting wearing their rings again as soon as they lost weight.  Prince William caused a ruckus when he declined a wedding ring- and is there any danger of anyone thinking he is single?  Some deploying soldiers tattoo their wedding rings onto their fingers, and wedding rings are the only jewelry worn to war by many female soldiers.  My wedding ring is a plain, gold band, but I would rather lose my engagement ring (or any other jewelry) than my "band of joy."
Posted by oxinsocks at 5:00 AM