St. George and the Bejeweled Dragon

It's easy to forget the impact jewels had waaaaay back when the average person did not regularly have access to them- and then its understandable why princes used them as lavishly as they did.  Jewelry and objects de art were not just adornment or beautiful (or even gross displays of or a method of saving wealth), but were about power...who wanted it and who had it.

This beautiful statue was a gift from a German prince to his brother, the Prince of Munich, the most powerful man in Germany at the time.  It's workmanship is unparalleled.  Seeing it knocks a modern viewer backwards; imagine what it was like seeing it in the 1600s when the viewer understood the realpolitik that lay beneath the enamel and gold. 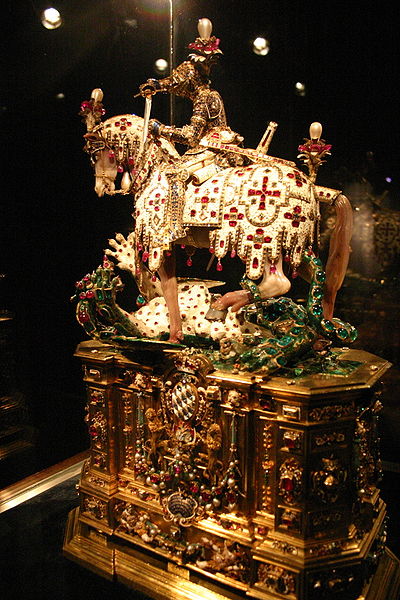 Statuette of St George (gold, enamel, silver-gilt, diamonds, rubies, emeralds, opals, agate, chalcedony, rock crystal, and other precious stones, pearls; height 50 cm); Munich, 1586/97
The statuette was made to house a relic of St. George that Archbishop Ernst of Cologne sent in 1586 to his brother,  Duke Wilhelm V of Bavaria.  In the seventeenth century, the statuette was displayed on important feast days on the alter of an opulent chapel, the Reiche Kapelle, in the Munich Residenz.  The saint's face behind the removable visor is carved from wood and resembles Duke Wilhelm V.  The sword's blade is rock crystal, and both St. George's armor and the horse's barding are intricately enameled and set with stones that are flush with the surface of the piece.
Amazing.  Powerful.

Posted by oxinsocks at 5:00 AM

I had a puzzle depicting this when I was young, that I just adored.Inspired in me a lust for gold and jewels and pearls and encrusted gems. I never even knew what it was until I finally bothered to look it up almost 50 years after I first put it together.