This week's posts are provoked by women's history month and are in honor of the women (and men) who advanced civilization by establishing the worth and legal standing of all people, regardless of their sex.  In the West, women my age and younger cannot remember life before legal protection from sexual harrassment and without the right to take oral contraceptives- thank God!  So what does this have to do with jewelry?  Read on...

Most suffragette jewelry is fraudulent.  Supposedly, suffragette jewelry is green, white, and violet and secretly represented "Give Women the Vote."  The Women's Social and Political Union (WSPU), disparagingly called "suffragettes," were not outlawed and their colors were not secret.  They participated in violent protests, arson, and vandalism, and were treated with horrific brutality by the police.  Their motto was "Votes for Women," not "Give Women the Vote."  Some contemporary commerical and arts and crafts jewelry was created supporting the cause, but the phrase "Suffregette Jewelry" is anachronistic.   Genuine jewelry created for the women who participated in the struggle is very rare, usually commemorates specific events, and usually remains within their families.

Today's jewel is a genuine piece of suffragette jewelry.  It is a pin or badge depicting a portcullis with a prisoner's arrow on it.  It was given to commemorate imprisonment in Holloway Prison, a women's prison in north London. 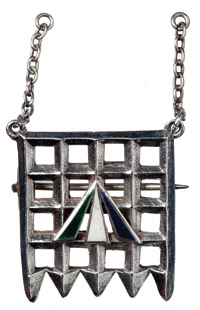 Thank you, ladies.
Posted by oxinsocks at 5:00 AM